Right now, and no doubt for the future, broadband performance in America is a very hot topic. And by hot topic, we mean – hot policy area. But beyond the federal level, individual Americans require access to good broadband, and they need to know they're getting the service they actually pay for.

Now as much as ever, the U.S. government – in particular the FCC (Federal Commerce Commission) has made connecting Americans a priority, through a program called Measuring Broadband America (MBA). As we continue our role in Measuring Broadband America with the FCC, we thought we’d share a bit more about the fundamentals that are driving this program, a little of MBA’s history, and most importantly, the cruciality of American citizens testing their internet at home and making this all possible.

SamKnows started working with the FCC on Measuring Broadband America in 2011, so, a decade ago from now! At the start, the program focused on comparing different access technologies (Cable, Copper, Fibre, Satellite), publishing an annual report each year, using data from a reporting month between September and October. 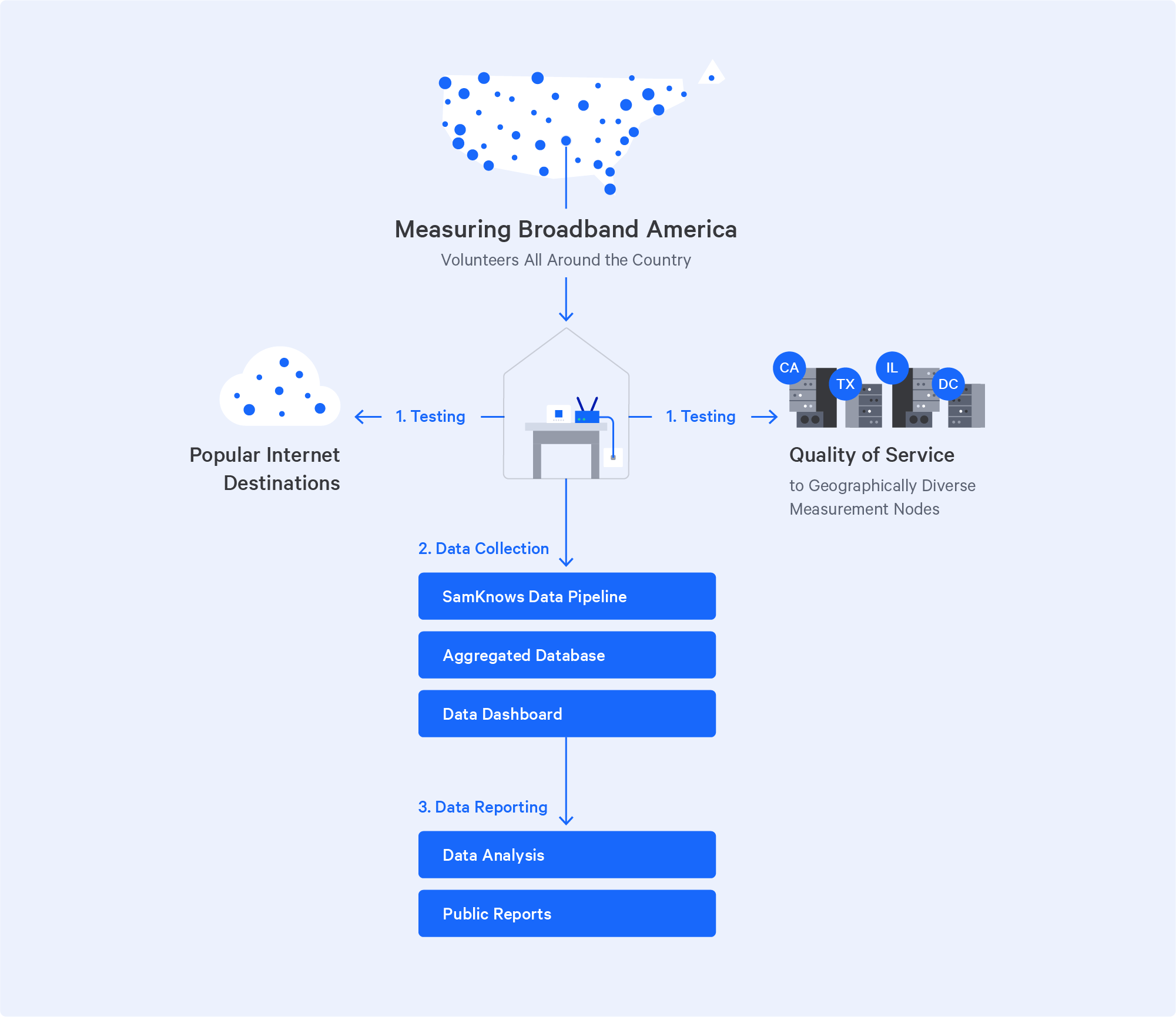 Since then, the program has developed significantly, the most noteworthy development being that it now collects data for both fixed and mobile broadband. In 2020, during the Covid pandemic, we published monthly Critical Services Trackers showing the performance of networks during lockdowns. Throughout Measuring Broadband America, SamKnows and the FCC have made sure the program is checking for three fundamentals to ensure good service for Americans

Here are what we call the Three A’s, and how we’re following them:

Availability - where is currently served with broadband?

The FCC minimum defining level for broadband is 25/3Mbps. The FCC Speed Test app accurately records location of speed tests, which can help to map the availability of mobile broadband. On the Fixed Broadband side, we're always keen to encourage more citizens to test their internet from home, to give us a clear picture of underserved areas whilst maintaining the privacy and anonymity of people’s personal data.

Affordability - is broadband affordable if people do have access?

While the MBA does not gather pricing data, inferences can be taken by the broadband packages which are included in the MBA. So, each year a Sample Plan is created to decide what speed tiers will be included in the report. The most popular speed tiers from each ISP are included covering up to 80% of the subscriber base. By working in this way the MBA gives insight into what speed most people subscribe to from each ISP - the number of slower and therefore cheaper tiers included indicate how affordable broadband is.

Actuality - are people actually getting the service the ISPs say they get, and they pay for?

This is one of the key pillars for MBA and the data collected by the program is used by both the FCC and industry alike to assess whether Americans are receiving what they are paying for. American citizens can see what kind of service they’re getting first hand, and hold their ISP accountable if needed. We have a process we follow with ISPs which take part in the MBA, which is called ‘Validations’. In this, we send ISPs the details of all volunteers included in the MBA Sample Plan and ask the ISP to confirm if they are on the speed packages we think they are. Whether it be 100/10Mbps, 200/100Mbps, or etc. ISPs then return the validation files to us, confirming or updating volunteers’ packages so we know for certain what speed package our citizen testers are on. This allows us to say with confidence the % of advertised speed people are getting - crucial to the actuality argument. Also, no other data collected by other organizations are validated like this.

Becoming a volunteer for Measuring Broadband America is an incredibly useful and very practical way to test your internet service, see what kind of speeds you’re getting and make sure you receive the service you pay for. Sign up via the FCC’s site to become a volunteer.