The COVID-19 pandemic has led to the world’s largest ever working-from-home experiment. This has inevitably led to questions about the ability of broadband networks to cope with the additional traffic. Last week we published our first report that looked at some core metrics in the UK. Today we are publishing a first high-level look at how speeds have changed across the US since the start of the pandemic.

The map below shows the percentage change in download speeds by state since the lockdown was put in place.

Our results show that almost all states have seen a slight drop in download speeds. The largest drop we observed was 3.9%, but the majority saw around a 1% decline.

Of course, these are averages and therefore have the potential to hide individual users that are seeing much more significant drops.

Percentage change in download speed by US state, between 12th March and 24th March 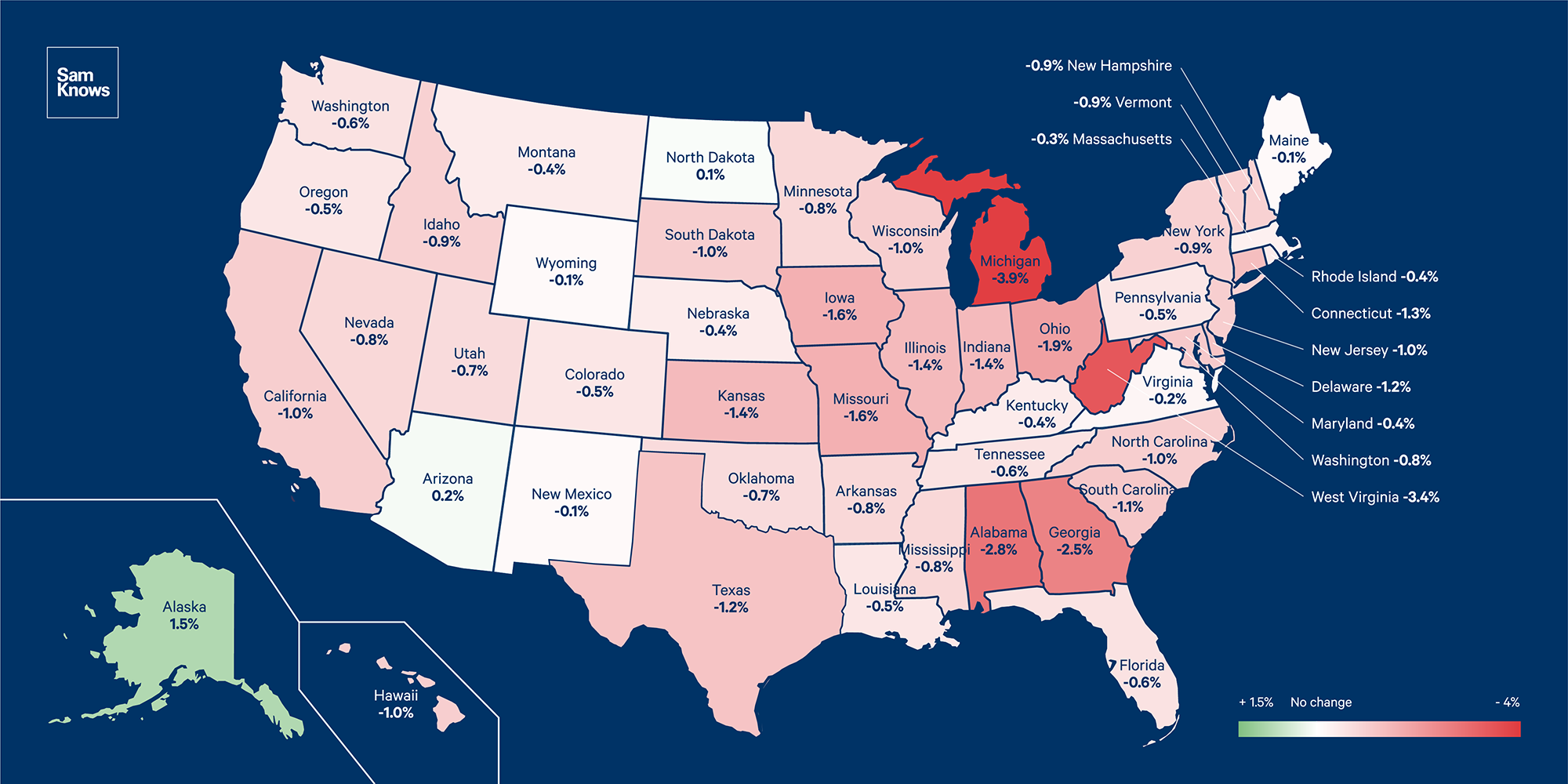 These declines in speeds are much less pronounced than what have been reported elsewhere. Other articles, such as this piece from BroadbandNow and this one from Fastly, have reported seeing much more dramatic falls in download speeds. The reason for such a significant difference is likely driven by differences in measurement methodology.

The speed tests we used to generate the map above ran over 16 parallel TCP connections for a duration of 10 seconds. The idea behind using multiple parallel TCP sessions is to ‘stress’ the broadband connection as much as possible, in order to measure the full capacity of the link. If any of the TCP sessions encounter packet loss and backs-off, then the other connections will quickly pick up the slack.

Both BroadbandNow and Fastly’s data are based upon measurements that use a single TCP connection, which means that they will suffer much more acutely in the face of congestion (they don’t have other TCP connections to fill available capacity after a brief period of packet loss). Moreover, Fastly is a CDN, meaning that their data will be based on analysing traffic passing through their CDN. Most objects served by a CDN are relatively small, and we know that latency is a dominating factor in throughput for small objects. It is likely that the speed drops they are reporting are – at least in part – a result of increased latency rather than a drop in capacity.

So, which approach is correct? Well, they both are – they are just measuring different things. At SamKnows, we measure both single and multiple TCP speed test performance separately, which allows our customers to see deltas like the above.

Broadband infrastructure in the US is holding up generally very well given the dramatic increase in internet usage. Whilst most states are seeing some declines in performance, these are very modest.

We are continuing to track performance changes around the world and will publish further blog posts looking at a range of other metrics in the coming days.

The map presented above was generated from measurement data gathered from more than 500,000 US homes that have a SamKnows-enabled home router installed. These home routers run regularly scheduled speed tests to a major US-based CDN over multiple parallel TCP sessions for 10 seconds.

Our measurement sample for these two days is based upon more than 1.5 million speed tests.

Crucially, a router's measurements were only included if it reported measurements on both the 12th and 24th. Moreover, if the router appeared to change ISP (as detected by looking at its source IP address) or speed tier during that period, then it was excluded completely.